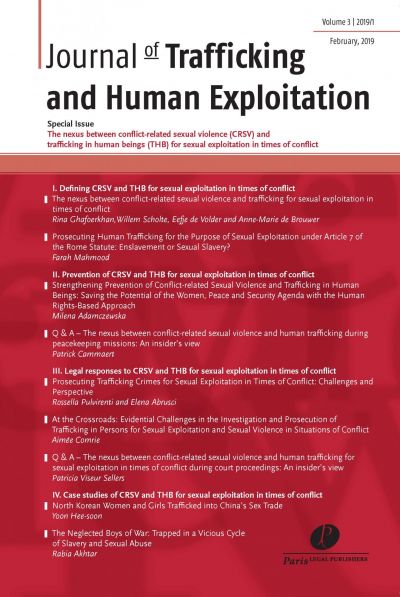 In its 2018 report on conflict-related sexual violence (S/2018/250, 23 March 2018) the UN Secretary-General stressed the urgency of addressing the nexus between trafficking in persons for sexual exploitation and conflict-related sexual violence, further to UN Security Council Resolutions 2331 (2016) and 2388 (2017). The articles in this Special Issue – partly in support of the UN Secretary-General’s call – investigate academic and practical perspectives in varied threads of the nexus between both crimes in times of conflict. This Special Issue illustrates the manifold predicaments which exist in looking at conflict-related sexual violence and human trafficking for the purpose of sexual exploitation in concert, despite the progress that has been made in recent decades towards a climate of international criminal justice for both crimes separately.

The articles of this Journal’s Special Issue are grouped to categorically confront the nexus between both crimes accordingly, namely based on (legal) definitions of the crimes (Section 1); prevention (section two); legal redress (Section 4); and case studies (Section 4). In light of the importance and urgency of the matter, together with the Journal’s main editor, Nicole Siller, we decided that the production of this Special Issue should be quick. Abstract submissions came by 1 June 2018 and it took ‘only’ half a year until this Special Issue was published in January 2019. This collection includes contributions from academics and practitioners from different fields of expertise and backgrounds, with the idea to bridge both worlds and to come to a better understanding of the issues involved.